One day last week, sometime around 4:00 pm, I commented, “I guess I should start thinking about dinner.”  My darling better half said, “Why, it’s way too early?”  Now, here’s where I get to the point of this narrative—my reply was:  “I like to have my ducks in a row!”

How many of you have heard that phrase?  Where does it come from?  What does it mean?

Well, it’s a fair assumption that it alludes to a mama duck leading her ducklings in an orderly single file.

The universal meaning is to have one’s duties, responsibilities, or affairs well organized and in order.

But where did it come from?!?  How did the phrase become a standard metaphor for good planning?  The earliest reference in print comes as a metaphor in a political article from The Detroit Plaindealer in November 1889.  Perhaps it refers to billiards when the balls are lined up in front of a pocket; maybe, it refers to a lawn bowling game of the 1700s where the duck pins were lined up in a row; could be from shooting galleries where tin ducks were lined up as targets.  No one knows.  But my favorite, although demonstrably untrue, proposal is that it comes from the Peabody Hotel in Memphis where ducks (who live in a plush enclosure on the roof) are gathered into a row by their trainer and paraded down a red carpet to the elevator and down to the lobby, twice a day, to swim in the fountain.

No matter where it came from, the meaning is clear.  In our house, “preparedness” is a well-honed skill developed as an Eagle Scout in the 1950s and “organization” is a character flaw of the Scout’s mate.  We file; we alphabetize; we collect and store for future use; and I prep the ingredients for dinner.  Apparently, our penchant for organization is obvious.  A friend once pranked us by rearranging the artistically placed bird collection atop a cupboard into “ducks in a row”!!!

So, we were prepared when the pandemic struck. We are prepared for hurricane season.  And as we weather phase #1 of our state’s economic re-opening, the guidelines may keep us cautious and frightened, but we have the resources to make the transition a little less stressful.  Someday, toilet paper may again be readily available in the grocery store.  But ‘til then…..we have our ducks in a row!!!

PS  Dinner that night was Meat Loaf with Raclette Potatoes: 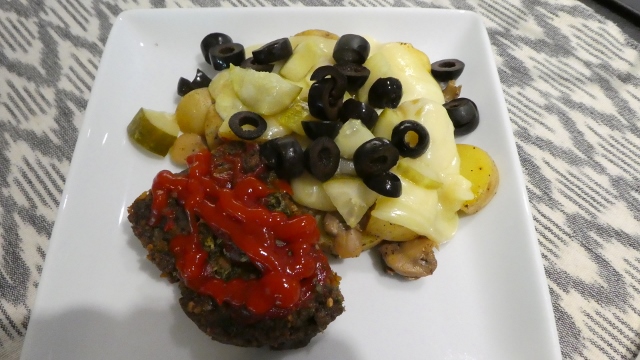 As we transition to a more normal life, stay safe, be well.

2 thoughts on “Ducks in a Row”