Actually, the New Year began 5 January 2017 in Ft. Lauderdale, Florida as we boarded the MS Amsterdam for a 4-month journey around the world.  We departed Port Everglades and set off down the East Florida Coast; made our way thru the Panama Canal; up the Central American & Mexican Coasts and then berthed in San Diego to collect more passengers.

The next 3 days were torturous as the sea churned and roiled from a confluence of winter storms.  As Southern California flooded, the Amsterdam deviated from course to find less ferocious seas.  Our arrival in Hawaii was a physical relief!

It was in December 1975 that we first sailed from Hawaii to the Mainland aboard the Matson Lines’ SS Mariposa.  Cruising was much different in those days.  Friends came aboard and joined us–in our cabin–for champagne and hors d’oeuvres catered by the ship.  After guests were instructed to disembark, passengers collected along the railings on the Promenade Deck where wheels of streamers were available to toss overboard to our friends waving from the dock.  It was so very festive!  Those days are sooo long gone!  And the Pacific crossing was just as rough; but without stabilizers!

We are now on our way to Majuro in the Marshall Islands. 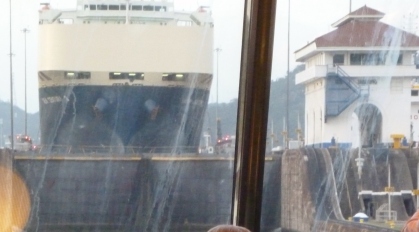 Exiting the lock with another ship right behind us. This was our view in the main dining room! 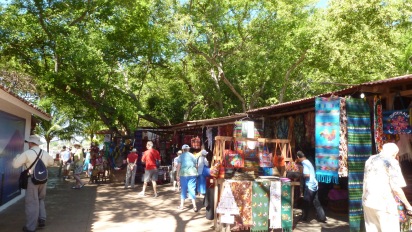 The beautiful murals in the Passenger Terminal at Pier 11 Honolulu